Here in Vancouver, specifically in the downtown eastside (DTES), on average two people are dying from an overdose per day, because of fentanyl. Fentanyl is roughly between 50-100x more potent than morphine. Enter in the real nightmare in the room, but Karmic just reported that they've found carfentanil (and 4 other fentanyl analogs) while testing some drugs in West Vancouver. To put the risk is context, carfentanil is 100 times as potent as fentanyl, or 5,000 times as potent as a unit of heroin, and 10,000 times as potent as morphine!
This is a good time to remind everyone that in Vancouver, there is free access to a Fourier-Transform Infrared Spectrometer (FTIR) at 4 locations in Vancouver, where you can safely test your drugs. This device can identify multiple ingredients, including cutting agents, in minutes. It's also a good reminder that Naloxone can reverse these affects, and you can get a kit for free at any pharmacy. 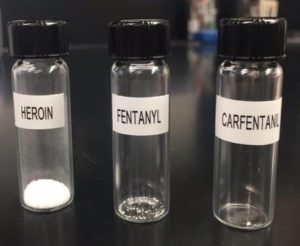 Comparison of estimated lethal doses of heroin, fentanyl and carfentanil-Huffington Post, May 2, 2017