I read an article in yesterday's Vancouver sun that is calling for the death knell of morse code, known by those in the amateur (ham) radio community as continuous wave, or CW for short. As I explained my twitter handle back in August, cq is a direct reference, or short code in CW that means, "Is anyone there?". When I got into ham radio around 2002, morse code was being discontinued from the Canadian military, which eventually lead to its demise as a requirement for ham radio. Before then, if you wanted to communicate on HF radio (radio under 30MHz, the around-the-world type stuff) you needed to show your proficiency in at least 5wpm morse code. I went out of my way to be one of the last ever to get this, so that I would have the certificate to prove it (I'm a bit of a certificate geek).  Nowadays to use HF you no longer need CW, but just to get an extra 10 points higher on your basic ham radio exam (at least in Canada). 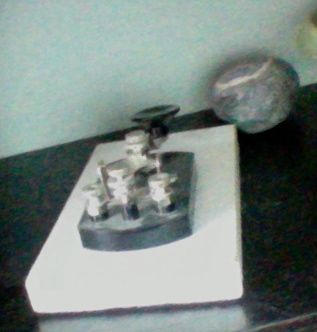 This does not mean it's dead, the modulation of your voice, even on single side band (SSB) is a lot wider than the simple on/off tone of CW. As we're on the upswing of the 11 year solar cycle, it means that CW is going to get more active in the years ahead. If you really wanna make some distance, as I glance over to the CW key on my fireplace mantle, CW is still where it's at.