There is a lot of talk about how we can improve discourse online, as well as solve online hate. I first had the opportunity to speak on this at RightsCon in Brussels in 2017, representing Canada.

It's a complicated topic, and no easy or obvious solutions, but the good news is that there are a lot of people researching the topic, and a few of us actively working on solutions.

I've had my idea for a couple years, and finally hired a group of students at BCIT to build out a first draft of my idea, which I've called Debate Pyramid.

The idea for this project stems from an article written by Paul Graham in 2008 called How to Disagree . A few years later, I saw that someone made that into an image: 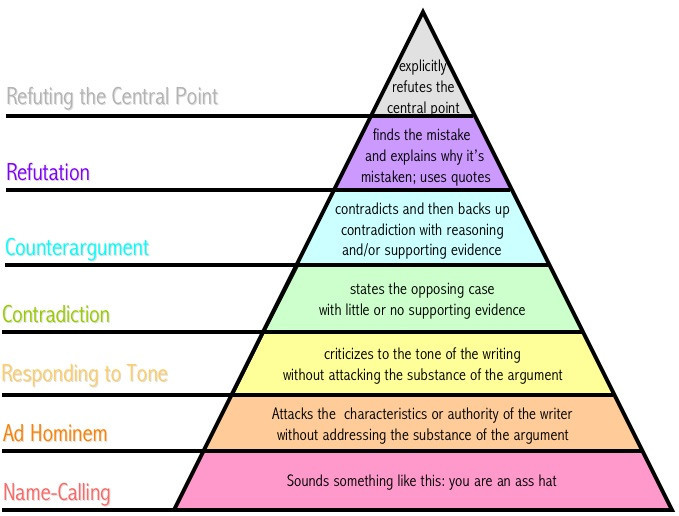 It was based on this image that I realized we could likely select most Tweets, or Facebook comments, that are in a debate, based on one of these levels. Then, over time, you could choose to filter out levels -- for example, I've chosen to block anyone who has scored over 100 votes of using Ad Hominem or Name-Calling attacks in a debate. I don't need to use up my mental real estate reading this.

I'd love your feedback if you give it a try. It currently works for both Google Chrome and Mozilla Firefox browsers, and you can vote on any comments or tweets on Facebook or Twitter with it.

This year while at RightsCon 2018, I met an ally named Shane Greenup who has been working on these issues longer than me.  If you're interested in this topic, you may also want to try out rbutr which is also a browser plugin.

What rbutr does is tell you when the webpage you are viewing has been disputed, rebutted or contradicted elsewhere on the internet. From there, you can easily click to read the rebuttals, which are prioritized in a crowd sourced way. I'm sure he'd love any feedback you have if you give it a try, as he's genuinely trying to improve online discourse as well.

I have a lot of other ideas as well, as simple one would be a snopes.com option for social media -- so if someone posts an old, debunked article which can easily be found on snopes.com, they would lose "social points" in debatepyramid, and so you could say, "as soon as someone has posted 10 articles debunked on snopes.com, I don't want to read their content anymore" as if someone is doing that -- that frequently, clearly their research skills are lacking and it would incentivize them to up their game in this area. I should add, the plugin would automatically post the snopes.com link as a response to their comment, by everyone using the plugin, so it would add that social pressure as well.

Thanks for reading. Let me know if you give DebatePyramid or rbutr a try, and what you'd like to see added or changed with either plugin. Also, if you have any other ideas, please share in the comments below for others interested in this topic area.

I’ve been asked fairly often, for decades, what I recommend for a password manager. For as long as I can remember, the quick answer is KeePass.

It’s been over a year since my last article, so I figure it’s time for an update. This post is an intended provide a professional update for those interested.

When You Have An Idea

The social media post that started it from my friend Murray: