When I came up with the idea for the IdeaWave conference last February, I randomly picked July 10&11th 2010 to run the first one. It turned out to be a really cold spring in Victoria, and as luck would have it, July 10th was the first nice day of the year in Victoria. People wanted to be outside, not sitting in a conference room. Live and learn, I reviewed the date and decided to think more strategically. As people will now be coming in from all over North America, I'll make the conference in February, as Victoria is the only place in Canada with no snow, and most Canadians would love to be in Victoria during this time. So I made the date for the second conference February 26&27th, this week-end. What comes next I could have never expected, yesterday it snowed. It snowed in a way that I'd never seen in Victoria. 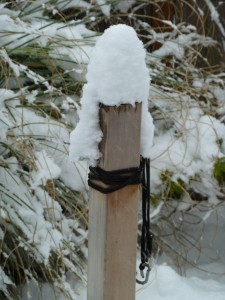 Here you can see snow on top of my hammock post. The few times it has snowed in Victoria while I've lived here, it melts when it hits the ground, but a day later and there's still ~6" of snow in my yard, as well as ice. So for those travelling in from around North America right now, anxious to see this weather that Victoria often brags about, are going to wonder if we've been making it up the whole time :)

I look forward to seeing many of you this week-end! If you're not registered yet, there are still a few dozen tickets left to the 2011 IdeaWave conference.

When You Have An Idea

The social media post that started it from my friend Murray:

With all of us at home, last March as soon as the pandemic was announced I launched ab8.ca with the intent on providing you a space to be online without foll...

Last year I had my first birthday zoom call as we couldn’t meet in person. On the call I had my closest friends, including someone who works for pharma, as w...