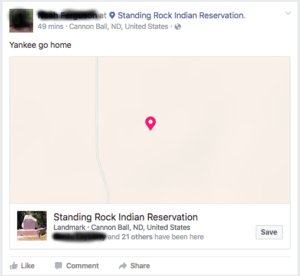 There are a lot of people today checking in on Facebook to suggest they are in Standing Rock, to stand in solidarity with the #noDAPL Dakota Access Pipeline protest. With the checkin, the user usually adds something to the effect of:

The Morton County Sheriff’s Department has been using Facebook check-ins to find out who is at Standing Rock in order to target them...

A few things of interest to these checkins.

This post is not intended to suggest you hide your political views, but it's worth considering what efforts you make in knowing what could happen in 5-25 years down the road, simply by you checking in -- in solidarity. Right now, there are Canadians being denied entry into the U.S. even though they've never been found guilty of a crime.

If we want to stand in solidarity with a more long-term productive outcome, it should likely be in reform of the surveillance culture itself that we're endorsing by being silent. Are you OK with your government or law enforcement logging all of your Facebook activity, forever? What about your web surfing? Emails? Phone calls? Microphone and camera in your smart phone? If you're not aware of the current laws in terms of how your usage of these can be monitored and logged forever, this is a great opportunity to get the facts.